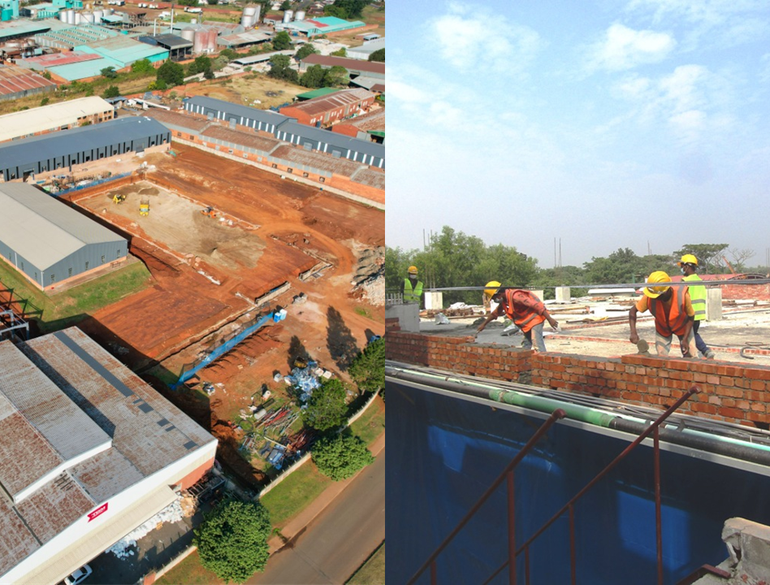 Next to a solid network of trusted Production Partners, LC Packaging has several production facilities for FIBCs in Bangladesh and South Africa. To cater for the steadily increasing demand for high quality big bags, both facilities are expanding their capacity.

In Bangladesh, our SA 8000 certified production facility Dutch-Bangla Pack Ltd. (DBPL) is currently building its third factory on its already existing premises. The shareholders of DBPL have a strong trust in the long-term growth potential of the market and are motivated by the commitment of the employees and support from LC Packaging.

The expansion will facilitate the output of 800,000 additional FIBCs, raising DBPLs total capacity to 3.2 million bags per year. The new facility will be built on top of the previously completed expansion building, DBPL II, and includes additional floor space of over 4,000 square meters. The expansion will be used for the storage of intermediate materials and it will include facilities for cutting, printing, sewing and baling. A warehouse for finished goods will also be constructed. Construction has already started and the facility is expected to be operational by October 2021.

LC Shankar has started construction of a new production facility and distribution center in Pietermaritzburg, South Africa, which is expected to be operational in October 2021. The need for more space and the opportunity to increase ‘green’ production are some of the main drivers for the build. The current production facility will be retired.

LC Shankar has grown immensely over the past five years and needs more space for its growing production as well as increased amounts of raw material and finished goods. In 2020, the factory produced and distributed over 600,000 big bags. With the rising demand for food safe bags, we are aiming to build a facility that can produce food safe packaging as well as packaging for the chemical, mining, resins, food and agricultural sectors that we already produce.

The new facility provides enough space to allow for growth and facilitate the expanding production processes and storage of raw materials and finished goods. The production facility will host around 175 employees and is part of a long term strategy. The aim, over time, is to expand even further to include extrusion and weaving. Next to the factory, distribution centre and office, there will also be a planted garden and other initiatives to further improve the working conditions of staff.