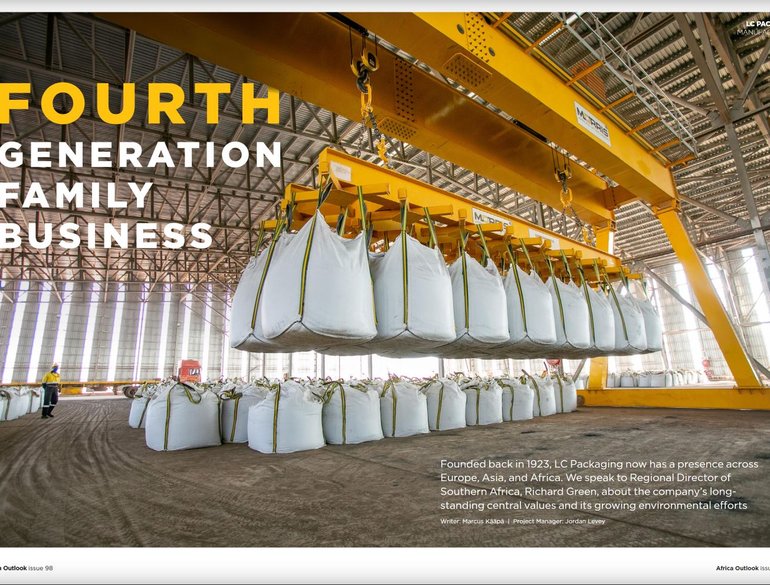 LC Packaging’s regional director in South Africa, Richard Green, sat down with Africa Outlook Magazine to talk about our family business, commitment to people and planet, experiences in the African packaging industry, and much more. Africa Outlook is a bi-monthly magazine for hands-on decision-makers and top management that highlights the latest global news affecting African businesses.

The feature article is part of Africa Outlook’s September issue and available as an online brochure. Read the full article here.

LC Packaging has been active in South Africa since 2010. Its first office opened in Johannesburg and acts as a hub for southern African countries, specialising in high quality FIBCs for the mining industry among others. In 2012, the office expanded with its own production facility: a joined venture under the name of LC Shankar in Pietermaritzburg, South Africa. An important production partner and supplier to blue chip companies in the region. LC Packaging South Africa has recently adopted the Broad-Based Black Economic Empowerment (B-BBEE) codes to stimulate the empowerment of black* people in South Africa.

Next to the South African markets, LC Packaging has also been active in West Africa since 2016. The office, based in Abidjan, Côte d’Ivoire, focusses on bulk packaging for food products like cacao. The North African market is served from the office in Belgium.

Today, LC Packaging has customer in 16 African countries in various industries, such as the mining, chemical food, and pharmaceutical industry. With its own production facility, offices and warehouses, the company has an impressive range when it comes to serving the bulk packaging needs of the African continent.

*The definition of black for B-BBEE purposes is anyone that is South African and non-white.